View the current networks available on the system by running the following command:

The screenshot below should be similar to the output you received.

There will be three standard networks available on any docker installation unless we have installed docker swarm.[1]

Normally, there is no real reason to do this unless we are trying to debug or analyze the traffic flowing through the host network.[1:3]

Since the container does not have its own network stack and it uses the host’s network stack, there is no scope for port-mapping, and all port mapping options are ignored and produce a warning message instead.[1:4]

Port mapping is very important, because the outside world needs to communicate with the container, and it can only do so when it goes through a host port. The host port needs to be mapped to a port in the container.[1:7] 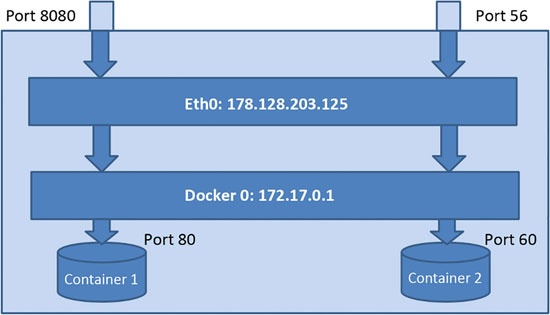 But none of this is required when the container wants to communicate with the outside world. This is possible because the container’s IP address is hidden behind the host’s IP address. It is as if the host itself is talking to other applications. To do this outbound Network Address Translation (NAT), Docker uses the Linux netfilter framework.[1:9]